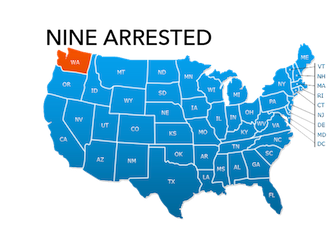 Offering cash, candy and video games for sex with a seven and 11 year old landed 9 men in jail in Washington State last night.

One suspect who showed up to meet the girls, had a loaded 9mm handgun, knives, four throwing stars, a police baton, handcuffs and a fire department jacket in his car.

The two-week investigation is still on-going to determine if any children may have been exploited by those now arrested.

Please click the link below for a more detailed news report of the events.