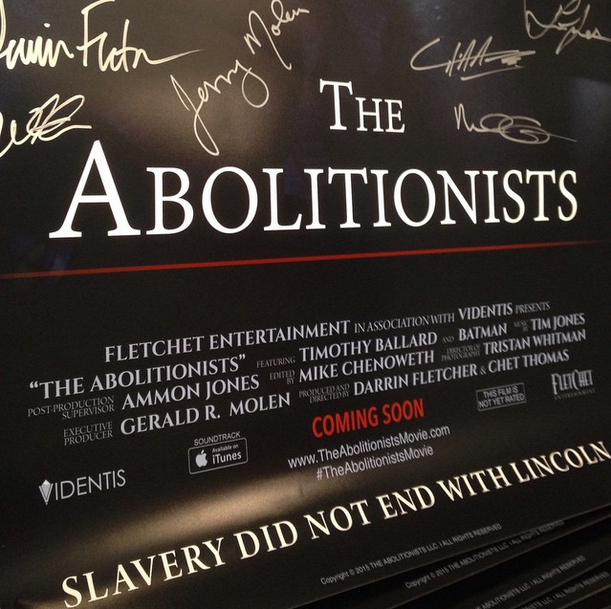 Editor’s Note: This story was originally written during the making of the film. Portions have been updated to reflect the completion of the movie.

Imagine being right there with the Jump Team when they rescue the guarded children who are being used as pawns in a sick game of sex. Imagine seeing the startled faces of the depraved men as they are being arrested for prostituting them. Or, perhaps you’d like to go undercover and play the “bad guy” who is buying the innocents.

It may not be possible for you to witness any of these things first hand, but a film crew is following the people who do it all, and have now turned it into a major motion picture called The Abolitionists. This Monday, you will have a front row seat to all these experiences “up close and personal.”

FletChet Entertainment owners Darrin Fletcher and Chet Thomas have been working with Operation Underground Railroad, documenting O.U.R. Founder and CEO Tim Ballard’s every move as he finds the children, works with officials, and has the bad guys arrested.

“Our goal was to make it as cinematic as possible. We wanted this to feel like you are part of the team. You’re literally going to see it up close. It’s gritty and it’s real and sad and heroic,” said Fletch of FletChet Entertainment.

The Abolitionists Film Crew in Nicaragua

Safety is always a concern for the Jump Team as well as the camera crew. “It doesn’t feel dangerous when you’re out there but when you’re back, it looks a lot more dangerous,” observed Fletch. Security dictates what the film crew can and cannot do. They use about 20 small Contour cameras that are attached to guns, helmets, hats, and hidden in rooms.

It’s not infrequent to go to places where they get patted down so they also use Pocket Cinema Cameras that work well in low light and blend in, making the film crew look more like tourists than documentarians. So far, they’ve used the cameras in Colombia, Haiti, Nicaragua, Peru, Guatemala, Ecuador, Dominican Republic and the United States with great success.

The “star” of the show is Tim Ballard, owner and founder of Operation Underground Railroad. It’s pretty much his journey of saving kids. Fletch says he is the perfect host and could make it in Hollywood if he wanted to. Fortunately for all, he’d rather be helping children.

According to Fletch, if there were a second star of the film it would be “Batman.” No, not THAT Batman. It’s a code name for a very unassuming man who helps O.U.R. find traffickers. Fletch describes him as one who is very comfortable everywhere he goes.

“I don’t know how he does it. He goes into these places and I can’t look. I look at the ground. Then I think I have to start looking because I’m drawing attention to myself. I look up and he’s right at home. Just at ease working undercover arranging buying little girls.”

Batman was telling a story that was so disturbing that I cut my camera. Chet cut his camera. You don’t see any graphic images. It’s all very clean, except for your mind’s eye in that moment.

In Cartagena the film crew stumbles upon a beautiful cathedral and sends Chet, with his “sliver tongue” to find out what it’s all about and see if they can film inside. He comes back with a 93-year-old priest who gives them a tour of San Pedro Clavier Cathedral.

Inside is a glass coffin of San Pedro. It is the perfect backdrop for filming the meeting between the priest and Tim Ballard. The priest says Cartagena was the corner pin for bringing slaves to America and that San Pedro would see the slaves arrive and go and smile at them so they would at least see one friendly face.

“It’s a great story. There are really great stories about heroes who, in their own right, should be abolitionists,” said Fletch. The irony of the former slaves and today’s trafficked children is not lost on the film crew.

To ensure the quality of the film, Chet and Fletch enlisted Academy Award winner Jerry Molen as Executive Producer, someone Chet has worked with for many years. Molen may be best known for working with Stephen Spielberg on Schindler’s List, Jurassic Park and The Minority Report.

Fletch says that although Jerry comes from an executive level, he is very much involved in the making of the film. “Once we had a cut that we’re happy with, Jerry would watch it and give us some notes and we would implement those. He’s also very well connected so his name still calls down a lot of power.”

And they’re all hoping that power and quality of work will win the film some attention and notoriety; not for them so much as to shine a light on the issue of child trafficking which will hopefully create more awareness and fund more rescues.

Funding for the film has come from private investors so as not to take any funds away from those who are rescuing the children. The Abolitionists will be released in 600 movie theaters across the United States this Monday, May 16th.

In making the film Fletch has discovered a disturbing truth. “I’ve learned people will do anything for money and there are good people and bad people everywhere. In our film we make a very strong attempt to ensure that the countries we’re in don’t look bad. We make very sure that there’s also a good story in the place where we go.”

Operation Underground Railroad is now hoping this movie will start a movement that will cause people to rise up and help rescue these children from slavery. Everyone can become an abolitionist.