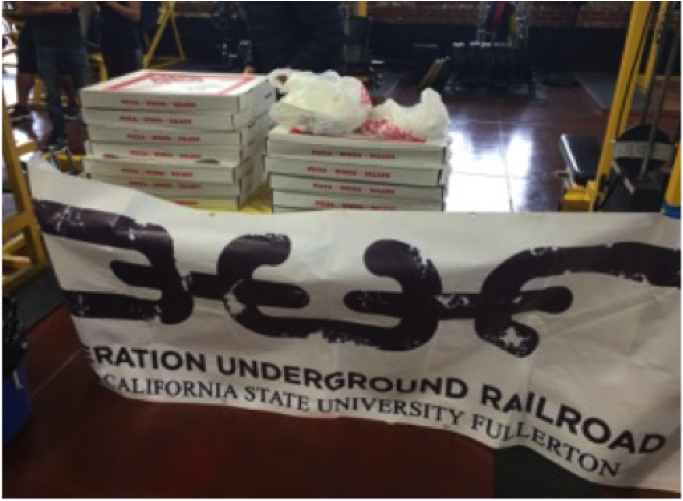 The world is our biggest classroom and if you’re lucky enough to have a college professor who understands that, the lessons you learn will last a lifetime. Such is the case in Professor Ryan Gottfredson’s management classes at California State University – Fullerton.

“After my Fall 2014 semester, I was looking for a group project for my students that was more meaningful than the typical business case analysis. So I had the idea of having my students support a non-profit organization,” says Gottfredson.

In an effort to get his students to learn and practice management and leadership principles covered in his classes, Gottfredson tasked his student groups with developing and carrying out at least one event to raise money and awareness for Operation Underground Railroad. Gottfredson has now used these projects for two semesters across four Junior and Senior level class sections. Of his students’ experiences, he notes, “I believe that these group projects have been incredibly rewarding for all involved. I have received numerous comments from students stating that this was the best group project that they had ever worked on.”

The project took an entire year and involved three of his classes. There was MGMT 340 Organization Behavior, MGMT 442 Managerial Leadership, and then MGMT 443 Team Leadership Skills. “All of these groups were tasked with developing and carrying out at least one event to raise money and awareness for O.U.R.,” noted Gottfredson. “I believe it was an incredibly rewarding semester all around. I got numerous comments that this was the best group project that they had ever worked on.”

The students went to work enthusiastically knowing that their efforts were not only a class assignment but would truly help children all over the world. They organized Yard Sales and Donut Sales, Bowling Night and Poker Night, a CrossFit Competition and Soccer Tournament, just to name a few, in order to bring awareness to child sex trafficking and to help O.U.R. rescue children from traffickers. A noble goal in any classroom.

Today, it is estimated that there are over two million children being used as sex slaves. Some are kidnapped, some are trafficked by a family member, and some are just trying to survive. Operation Underground Railroad is trying to find them and rescue them from the clutches of the traffickers who use them. We also help them recover from the ordeal they have been through and start a new life, as well as have the traffickers arrested.

Across the two semesters, Gottfredson’s students have raised over $23,000 along with over $2000 in donated supplies and materials. [They] feel as if they saved four children through their efforts, which they are thrilled about,” says Gottfredson. “In all, it was a wonderful experience. I had many students tell me that these projects were life-changing for them, that they have never had the opportunity to do something so meaningful in college, and that they want to continue supporting O.U.R. and spread awareness of Operation Underground Railroad.”

We can support that type of thinking whole-heartedly! If you would like to join the cause please visit our web site at www.ourrescue.org.