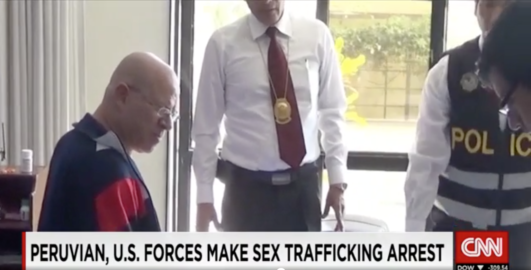 In December 2015, American pedophile Joshua David Brown was arrested in Peru along with five others for running an active child sex trafficking ring for several years. O.U.R. had a team on the ground to help support the local law enforcement and one of our outstanding partner ministries in Latin America in the operation. 36 victims were rescued, including minors who are now in aftercare homes. One of the minors rescued was a 4-year-old that was being sold online for $7,000.

Large amounts of child pornography were found in Brown’s home. He was known to have women help him lure children into his trafficking ring. Even though six people were arrested during the operation, there was one suspect, Patricia, who was missed. In the past few months, there has been a big development in the case– this suspected trafficker and accomplice to Brown has been captured.

Since being captured, Patricia has identified an additional 145 victims who were involved in Brown’s trafficking ring. Many of these victims, both male and female, were ages 3-5 when Brown began abusing them. Patricia played a big role in helping kidnap these children and selling them both in Peru and out of the country. She also supplied Brown with the two young girls that he allegedly murdered. Because this woman has been captured, hundreds of children’s lives have been saved.

The district attorneys and prosecutors on this case in Peru have gone above in beyond in dedicating their time to it and making sure that they follow up with all possible leads to take down more traffickers.

O.U.R. is grateful for the opportunity to help fund parts of rescue missions like these. With every trafficker that is arrested, it is estimated that 100 – 200 children are spared from being abused. In a case like this one with such a large trafficking ring, the number saved is even higher. The December 2015 operation led to another big arrest in 2017, showing that each donation has a lasting impact on these children’s lives.

O.U.R. also has seen great developments in aftercare in Peru. Read the story of Maria’s Miracle and learn about how doctors were able to safely remove a push pin from her lungs without any infection.