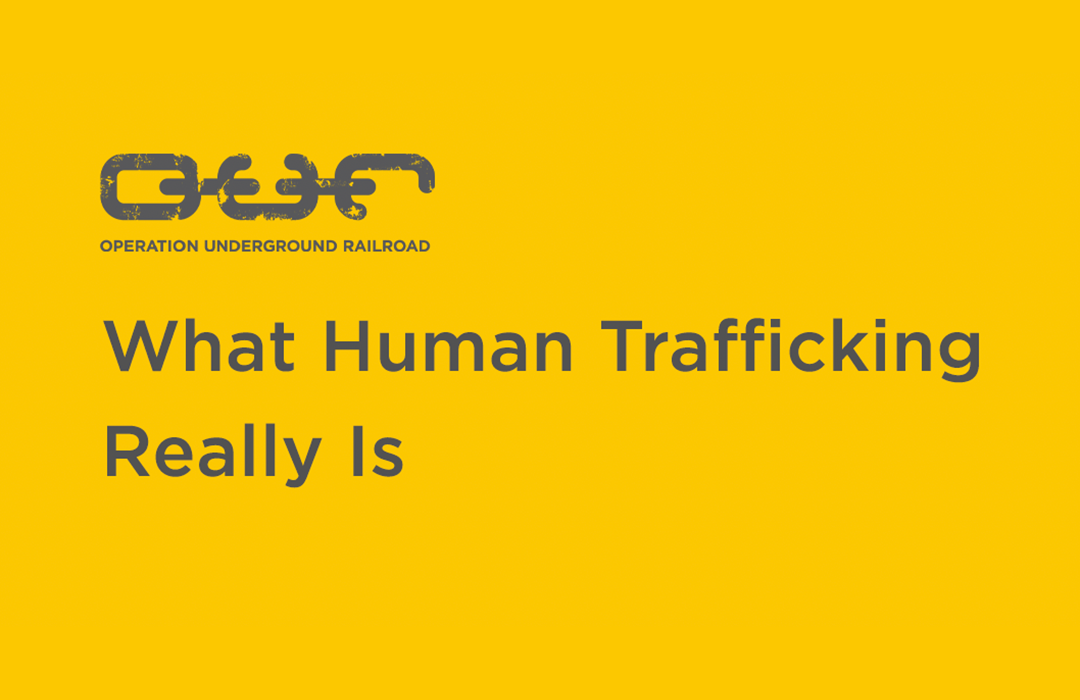 TRAFFICKING IS NOT ALL FOR SEX

The most detected form of human trafficking globally is sex trafficking. (UNDOC GLOTiP 2018, p 29) Forced labor is the next highest. Forms of exploitation vary widely across the world, and may include trafficking for organ removal, forced marriage, exploitative begging, criminal activity, and more.

In short, human trafficking is a crime that involves exploiting a person for labor, services, or commercial sex.

In domestic sex trafficking cases we have seen instances of families selling their own children for sex within their own homes. In one case, a mother allowed men to come into her house and rape her daughters in exchange for luxurious gifts. In another U.S. case, a 14 year old girl was trafficked by a man that she believed to be her boyfriend. Under the impression that he loved her, she was excited when he suggested that they plan a vacation together. When they arrived in a nearby state, the “boyfriend” immediately turned on her. He demanded that she sell herself on the streets in order to pay for hqer portion of the vacation.

Rebecca Bender, a human trafficking survivor and advocate, was a young single mom when she was first trafficked by her boyfriend.

“The reality is that my daughter may have gone to school with yours; I may have stood next to you in the grocery store line. And nobody ever noticed. Nobody ever noticed because we all envision that one way. I went through the thought of I got on the plane “willingly”. I got out of the car “willingly”. I didn’t fully understand the complexities of force, fraud and coercion played out in my everyday life.”

Many trafficking victims are initially targeted online. After beginning conversations, predators will eventually bring up sexual topics because their main goal is often to receive sexual pictures and videos or lure a child out of the home for sex.

A study by Thorn revealed that, “technology is playing an increasing role in grooming and controlling victims of Domestic Minor Sex Trafficking (DMST).” 55% of victims entering the life in 2015 met a trafficker and built a relationship by text, website, or apps.

NOT ALL PREDATORS ARE TRAFFICKERS

Both predators (those who consume child pornography and are at high risk of being contact offenders), and traffickers (those who sell or facilitate the selling of children to predators), are equally important for us to unearth.

A predator exploits the vulnerable by consuming child pornography and then often shows up at a sting operation where they thought they would be violating an actual child. These predators can also be labeled traffickers as they disseminate and produce inappropriate material that further exploits these children to continue feeding the insatiable sick appetites of other predators.

In a different spin, traffickers also take the form of any person in an organized effort to exploit a child for sex. These could be taxi drivers who would never watch child exploitation videos, but are paid by pimps, brothel owners, bar owners, hotel management or anyone in a network of individuals who are involved in knowingly guiding predators to a child who is being sold for sex. In short we pursue anyone who plays any role in knowing sexual exploitation of children, predators or traffickers.

An excerpt from “And Boys Too”, by ECPAT USA

Globally, males and females are trafficked for different reasons.

Differences in data could also be reflecting different countries’ capacity to detect, record, and report on trafficking. Overall, Polaris notes that it is important to know that male victims are less likely to be identified, and LGBTQ boys and young men may be more vulnerable to trafficking.

VICTIMS ARE NOT COMMONLY UNDER PHYSICAL FORCE OR KIDNAPPED

“While there are circumstances in which traffickers may physically hold the people they exploit, it is more common for them to use psychological means to date, lure, recruit, groom and control their victims.” – Rebecca Bender’s “Trafficking Truths”

One fifteen year old girl in Michigan was excited when a cute boy at school offered her a ride home. After drugging, exploiting, and photographing her, the boy threatened to show her family what had happened unless she did what he said. He coerced her into selling her body for sex. He would pick her up in the middle of the night and drop her off at beautiful homes in the suburbs of Detroit. This boy was not a stranger, but a friend from school. Although she lived at home, her parents did not know what was going on.

Psychological manipulation is a common method of control that traffickers use. They play on a person’s vulnerabilities to manipulate them and gain their trust. CNN outlines ‘5 disguises’ that human traffickers use: the Pretender, Provider, Promiser, Protector, and Punisher. Many victims are trafficked by somebody they know in their family, friend group, or online.

TRAFFICKERS ARE NOT ALL MEN

The 2018 UNODC GLOTiP reports that internationally, 35% of persons prosecuted for trafficking were female. This percentage is similar to previous years. UNODC reports that the percentages differ by region, which may be reflecting the different approaches of criminal justice systems worldwide. In addition, “developing countries may be able to convict only the lower ranks of the trafficking network, resulting in the conviction of those who normally control or recruit the victims, the so-called ‘madams’ in some context of sexual exploitation.”