O.U.R Stories
Education
This is How Traffickers Can Trick Their Victims
3 MIN
Education 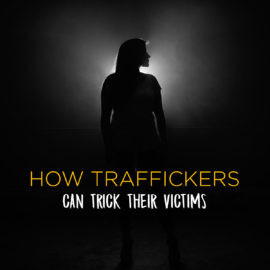 A trafficker’s main method of control is psychological.

This is manifested in various ways, such as giving victims a hopeful (but false) timeframe of liberation or buying them gifts. Another tactic traffickers use is convincing their victims that they truly love them. This is something that happens to kids, teenagers, and adults alike.

One woman shared with our Aftercare Team that her trafficker would dye her hair for her. She felt loved by this action because no one else in her life had ever shown her love like that. Even though he would do things like this for her to convince her that he actually loved her, in reality he was exploiting her and selling her.

Countless survivors have described how their traffickers would make food for them or flatter them by asking about their hopes and dreams. In other extreme cases, mothers have sold their own daughters.

O.U.R. Aftercare Director Jessica Mass explains that this is a difficult concept to understand, as it should be. Exploiting someone and convincing them that you love them at the same time goes against every natural instinct of a mother or close family member.

There are many disguises that traffickers use to bring about their own success. Tim Ballard has described what it is like to be in the home of a trafficker and how he has heard them talk about their own families. One man, Eduardo, showed Ballard the 11-year-old he wanted to sell him in the same conversation that he flaunted pictures of his wife and daughter and talked about how much he loves them.

A study by CNN identified five different disguises that traffickers hide behind:

1 – Pretender — Someone who pretends to be something s/he is not, such as a boyfriend, a big sister, a father, etc.

2 – Provider — Someone who offers to take care of an individual’s needs, such as for clothes, food, a place to live, etc or their wants, like cool cell phones, purses, parties, etc.

3 – Promiser — Someone who promises access to great things, like an amazing job, a glamorous lifestyle, travel, etc.

4 – Protector — Someone who uses physical power or intimidation to protect (but also control) an individual.

5 – Punisher — Someone who uses violence and threats to control an individual. When the previous disguises have been exhausted, an exploitative person often becomes a Punisher to maintain control.

We have the power to protect our youth. We can educate ourselves more on the issue of human trafficking and work to strengthen our communities against it. As we learn to see through traffickers’ disguises and learn how and why two million children are being sexually exploited worldwide, we will be able to better fight against the evil of child sex trafficking.

The United States has united in many ways against trafficking. Read “This is How America Has United Against Sex Trafficking” here to learn how.