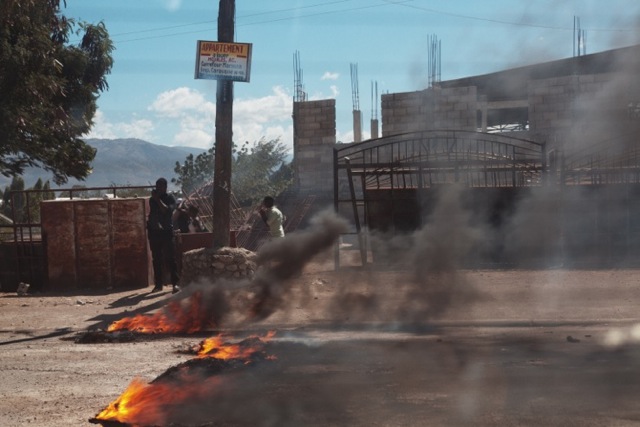 The most dangerous part of rescuing children from traffickers may not be what you think. There are many steps leading up to the rescue and arrest. First and foremost, you have to do some reconnaissance. If you’re lucky, it all goes well. But, that’s not always the case as our Jump Teams discovered on one of its recent intelligence gathering missions.

Editor’s Note: The following are excerpts from an interview with OUR Founder and CEO Tim Ballard as he talks about his Jump Team exploring areas of Haiti in search of enslaved children.

We are working in certain regions in Haiti where there’s a lot of human trafficking going on with children, whether it’s for sex or for labor. We’re going into those very dangerous places. We went into one village earlier this year (2015), where we had a small team and had set up a medical clinic to help the people but also to gather intelligence.

We had 500 people come through our clinic. After we had treated most of the people at the clinic, the group of traffickers turned on us. They didn’t know why we were there, except to do this clinic, but they were thugs and thugs do thuggish things.

We became vulnerable as a bunch of Americans who were driving in decent cars and clearly had resources. They surrounded us with machetes and machine guns and started threatening our lives and wouldn’t let us leave this little village that we were in.

The village elders went back to talk about what they were going to do. Some people were yelling, just kill two of them and send a message, or take their car, or whatever. And we’re just listening to this and our fate was in the elders’ hands. The village elders came back out arguing and one of them said, “I think you guys are innocent and am grateful for what you did, but I can’t control this mob so it’s up to you.”

So, we just all kind of put our heads down and prayed and got in the car and decided to just move out. They had guns and I told my guys, “If they start shooting, just run them over and just get out of here.”

In the time that we were waiting things had calmed down. I’d sent one of my guys who is a former Navy SEAL out to kind of calm them and disperse the crowd. I mean, things got super tense.

The crowd dispersed enough and the five gunmen who were blocking the road had dropped to about two. Who knows where they went. They went to lunch or something and that allowed us to go for it and luckily the guys didn’t fire and we got out of there. It was a very intense moment.

Question: What did the elders find you innocent of?

Ballard: They were trying to accuse us of being there for other purposes. They were saying, “Why are you here? White guys don’t come and help us. What are you after?” And they were saying that maybe we ’d found oil on their land and we were here to steal their oil. They were just making up allegations – all the mobsters. It was just an excuse. It’s a mob mentality. It’s very scary. I mean, even people who we had just treated had turned on us within hours.

We were at the point with them that if somebody had accidently bumped into somebody, if one of my guys had bumped somebody and he pushed him back that could be it. Everyone starts picking up stones and starts throwing them or something. Mob mentality is a scary thing because nobody feels responsible and they all get riled up. So these guys were just trying to rile up the crowd against us, ultimately to try and steal stuff from us. I believe they wanted our stuff.

So, when the village elders came out they were saying, “We don’t believe you did anything, but that you were here to help.” The truth was we did have other motives for being there, but one of the motives was to help.

We were very moved emotionally by watching this happen. We had real doctors there, and there were mothers there who had never heard a doctor say their kid was healthy and they were crying to know that their kid had been checked out and there were cases where we just handed out penicillin and likely saved lives.

By the time you get the intel and traffickers are bringing the kids to you where you meet, it’s still dangerous, but it’s less. It’s controlled. They’re coming to your house and bringing the kids. Or they’re going to a place where you’ve already stood up 20 cops around to be there to give you backup. So, the actual rescue part, and we do that by design too because now you’ve involved the kids and they’re here, and so we need to make it as safe as possible, generally, the intel gathering phase is always the most dangerous by far.