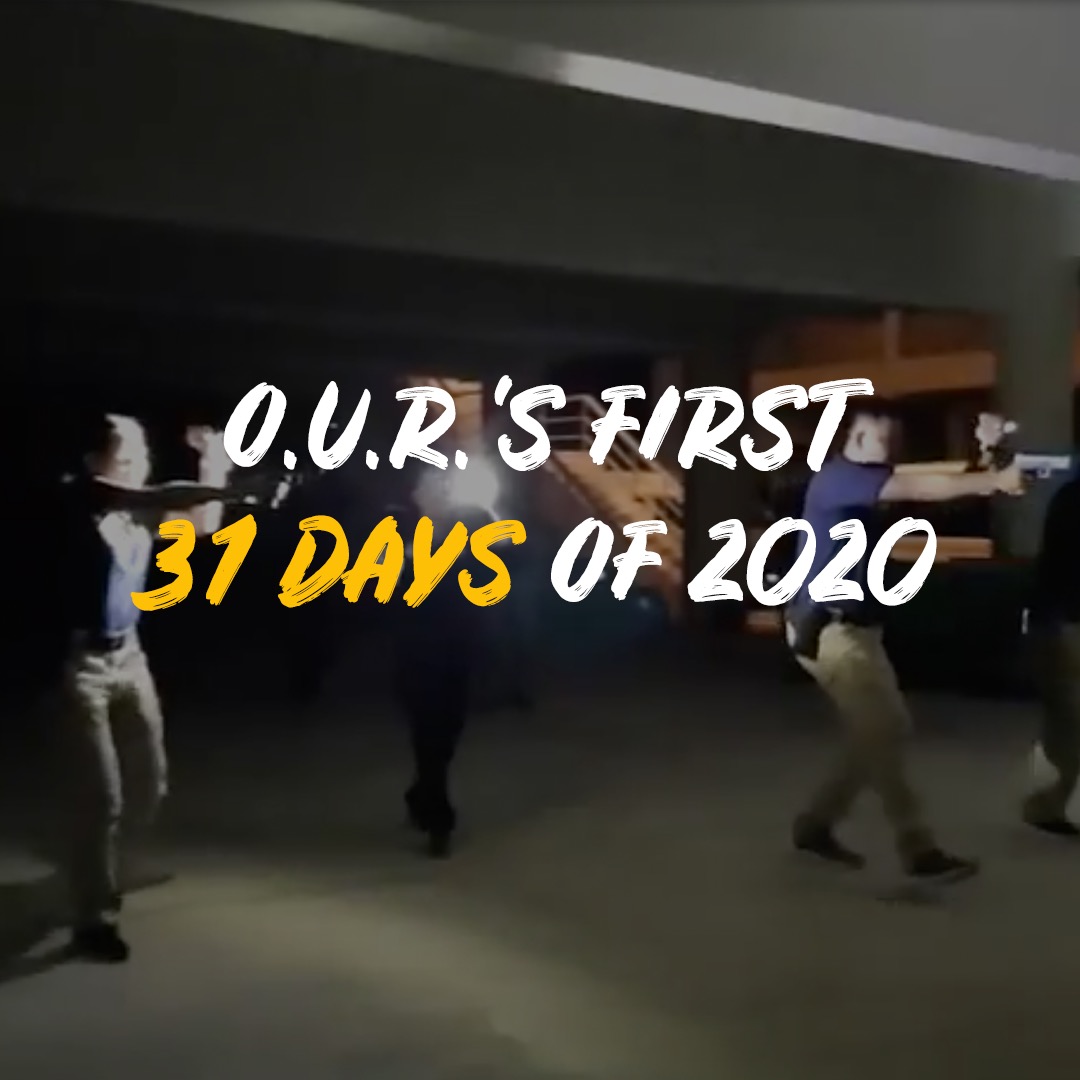 Thanks to our amazing donors and supporters, O.U.R. continues to grow every single day. We are excited to share with you how we have mobilized your support to fight human trafficking so far this year.

In January alone, O.U.R. has rescued 40 survivors and assisted in the arrests of 76 predators in the United States. O.U.R. currently supports law enforcement in 25 U.S. states.

Our online training aims to help the public feel prepared and confident in speaking up if they see something suspicious. 3,000 more people have received their certificates of completion this month!

O.U.R. held our annual “Free at Last” event in Utah on January 25th. Over 250 community members came together to enjoy food trucks, a humanitarian project, awareness booths, and even a virtual reality educational experience about the signs of human trafficking.

O.U.R. partnered with Agape International Missions’ SWAT Team and the Siem Reap Anti-Human Trafficking and Juvenile Protection Police (AHTJPP) in Cambodia to rescue 30 children who were being exploited at brick factories. This was the first time any large-scale action against brick factories has been taken in Cambodia.

Our organization honored National Human Trafficking Awareness Day on January 11th to raise awareness about the estimated 300,000 children at risk for trafficking in the U.S.

6. Our first aftercare assistance in France

The O.U.R. Aftercare Team provided resources for a mother and daughter who were in a dangerous situation and lured from South America to France for the promise of love. ⁠⁠

We were able to connect the mother and daughter with a shelter in France where they are safe and will be returning home to South America soon. ⁠

O.U.R. Aftercare assisted in starting a vocational training program inside the prison system in the Mediterranean. These classes are for girls who were wrongfully imprisoned after being trafficked, and we are supporting them as they work towards being freed.

Using technology provided by O.U.R., the Mesa Police Department reported that they were able to arrest 20 people and rescue 1 minor as part of an undercover sting operation. Search warrants were issued for digital storage equipment and the police were able to use the mobile forensic lab to process the evidence and conduct interviews.

We received almost 15 new volunteers per day in January! We are excited for these new supporters to join our force of over 10,000 volunteers across the world.

O.U.R. Aftercare helped repatriate a mother and her twins from the Mediterranean back to Africa, where they are receiving aftercare services.

Aftercare met with Southeast Asian aftercare teams to help expand their program and food budget thanks to a generous donor.

Operators went undercover in a Latin American city and assisted in the arrest of 15 predators, and helped free 3 survivors.

One of our survivors in Central America received a scholarship to attend beauty school.

One way that O.U.R. supports law enforcement in the United States is by providing specialized training when requested.

We have a group of over 10,000 volunteers that works to put on events to spread awareness in hundreds of communities throughout the U.S.

On Saturday January 25th, 18 O.U.R. volunteers joined with It’s a Penalty, A21, and other local organizations to assemble and distribute trafficking awareness kits to 400+ hotels & motels in the Miami area.

145,000 printed literature in English, Spanish & Creole, 7,000 wristbands, & thousands of lip balms, soap, and face wipes with hotlines & signs to look out for were distributed, along with a list of missing and exploited children from NCMEC in the Miami area.⁠

Joshua Miller from It’s A Penalty says, “It was amazing to see volunteers from so many walks of life joining together for this cause.” ⁠

As a result of O.U.R.’s training and support, the Utah Internet Crimes Against Children (ICAC) Task Force arrested 24 sexual exploitation predators and rescued 35 children. They provided these children with the necessary aftercare resources to begin their healing process.

In addition, this team was able to provide assistance in 337 cases to other ICAC task forces and law enforcement agencies. 8 trainings were also provided to Utah law enforcement officers.

In Utah, a 15-year-old was threatened with a knife, ‘kidnapped, drugged and raped’ by a West Valley City man. “It’s every parent’s worst nightmare,” said Jessica Mass, Director of Aftercare for Operation Underground Railroad. See the article for the whole story, including the interview with Jessica.

Although this is a rare case, conversations between parents and kids about abuse, kidnapping and other hard topics can be difficult, but are important.

Tim Ballard attended meetings at the White House as a member of the Private-Public Advisory Council to End Human Trafficking.

O.U.R. undercover operators provided a three-day intensive training to the already impressive Department of Provincial Administration of Thailand. The training included tactical shooting and ground control, close-quarters combat and defensive tactics, and emergency medicine tips. Together we will stop more predators from abusing any more children.

O.U.R. Founder spoke at the American Correctional Association in San Diego to 1,000 correctional officers, and delegates from North and South America.

A survivor whom we have been working with for a long time in South America has completed his vocational training and is excited for the future.

O.U.R. Aftercare organized a beach outing for survivors in Central America to help them heal by making new memories.

25. Survivor starts a science program at her son’s school

McKenzie (link to her latest blog story), the first survivor we helped repatriate from the Mediterranean back to Africa, is starting a science program for her son’s school. O.U.R. Aftercare will help provide resources on our next visit.

26. Operation Manila – O.U.R. assisted with our first arrest in the UK

O.U.R. team members in Southeast Asia identified a citizen of the United Kingdom seeking underage sexual contact. Through coordination with Thailand’s DSI (Department of Special Investigations) and the UK Embassy, UK investigators received all available information. Upon returning home, the suspct was arrested and charged with various sex crimes under UK law.

“I’VE SEEN SOMETHING THAT MAY BE SUSPICIOUS OF TRAFFICKING OR IS INAPPROPRIATE. HOW DO I REPORT IT?”

30. Tim Ballard appears as a guest on the Candace Owens show

“When I started doing human trafficking work I, along with most of America, had no idea what child slavery even was. How could that be real? I was quick to learn that it was/is the fastest growing criminal enterprise in the world.” – Tim Ballard

“You can only sell a drug once. You can sell a child multiple times a day.

I was honored to speak at Silicon Slopes this year. Inspiring to be around so many innovative companies and people. Any chance to spread awareness and broaden this fight is one I take.”