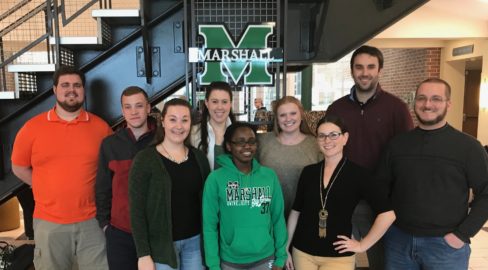 Through a partnership with O.U.R., a group of forensics students has assisted in the liberation of almost forty child trafficking victims and the arrest of ten suspected traffickers.

“There are no words to describe the feeling you get when you discover the information you uncovered helped save several children from being trafficked. Although the work we do is behind the scenes, we feel like a huge part of the team.”

– Tiffany Hussell, Program Manager for the Department of Forensic Sciences

How did they do it?

Professor John Sammons, Director of the Digital Forensics and Information Assurance Program at Marshall University, heard Tim Ballard featured on a podcast. He was captivated by what Ballard said about O.U.R.’s mission. He wondered if there was a way that his forensics students at Marshall University could assist in the mission to end child trafficking.

Sammons and his students are a part of Marshall’s Open Source Intelligence Exchange (OSIX) program. The program uses selected and vetted college students to provide open source intelligence collection and analysis for law enforcement and other clients.

As a part of the OSIX program, a select group of students are able to work real-world cases. Marshall senior Cole Linder said, “When this opportunity to be a part of this program came up I filled out the application immediately.”

After hearing of O.U.R.’s mission, Sammons reached out to us and set up a meeting with our SVP of Rescue & Recovery, Matt Osborne. They worked together to create a partnership where the students could help O.U.R. in investigations by researching any open source information on selected targets.

“It’s a win-win for everybody, and I think it’s great for the students and for the cause,” said Sammons. “It’s a horrible situation out there with all the sex trafficking and victimization of children. You just can’t let that stand.”

Sammons and his students have had great success so far, especially because so many people have contributed their time and talents to the issue. Assistant Professors Josh Brunty and Bill Gardner along with the school’s Director Dr. Dru Bora have been heavily involved in the project as well.

Dr. Dru Bora, Director of the School of Forensics and Criminal Justice Sciences

In addition, Program Manager for the Department of Forensic Sciences Tiffany Hussell has been a large help in overcoming a language barrier. She speaks fluent Spanish and has generously dedicated her spare time to help translate for the OSIX team when needed. “It’s not just students. Even staff members at Marshall have been moved to lend a hand,” she said.

Both students and staff at Marshall University have generously used their resources to help fight child trafficking. The students had never focused on trafficking in their classes. “Though this experience is different from other class, this is something that I truly want to do,” student Stacy Cossin commented. After learning how prevalent the issue of child exploitation is, the students saw their potential as they worked as a team to fight it. Cossin said, “This experience has been truly rewarding because as a group we were able to improve the quality of people’s lives. It is an amazing feeling to know that you are part of a team that can truly work together to make a small change.”

During the fall semester 2017, Professor Sammons’ students provided OSIX reports to support O.U.R. child rescue operations in Latin America, the Caribbean and Southeast Asia. To date, this intelligence has assisted in the liberation of almost forty child trafficking victims in Latin America, and in the arrest of some ten suspected traffickers.  “The opportunity to gather intelligence for a real-world operation has been the most rewarding experience throughout my college career,” student Emily Hudson said. “Not many undergraduate students can say they have seen the numbers of children they assisted in saving.”

Currently, O.U.R. operatives are using intelligence gathered by Marshall students to work undercover investigations on the other side of the world. Stacy Cossin said, “This experience has been tough but it is truly worth it…Every day there is some new tip that I learn to improve my skills.”

We are very grateful for the time and effort dedicated to these projects. We look forward to a continued partnership with Marshall throughout 2018 and beyond.

The Growth from Six Students to a Full Forensics Program

Sammons, a Huntington, West Virginia native, hadn’t always worked in technology. He spent almost ten years as a Huntington City police officer. He was heavily involved in investigating drug cases, but decided to switch careers when the hours of drug investigations affected the time he could spend with his six-month-old daughter.

He switched into a career focusing on technology at an important time – businesses were beginning to go paperless. Knowledge about technology became increasingly important as case evidence was also beginning to be mainly digital.

Sammons started at Marshall in 2008 when he was asked to fill-in as a temporary replacement for a recently departed faculty member. Ten years later, he’s still there.

The digital forensics and information assurance program began as an area of emphasis within another degree, which in 2006, had just five students. Today, Marshall University has 108 students in its four-year digital forensics and information assurance program. They have many courses including network forensics, mobile device forensics, cyber warfare, network defense, and open source intelligence.

Marshall University is also a part of the Bluegrass State Intelligence Community Center of Academic Excellence (BGS IC CAE). The goal of this program is to prepare the next generation of intelligence and security professionals including national security, homeland security, law enforcement, and private sector security.

O.U.R. is providing the keynote address for this year’s BGS IC CAE colloquium, which is held at the University of Kentucky. This year’s theme is human trafficking. In addition, Marshall’s students and faculty will participate in a panel discussion covering their work with O.U.R.

Their growth has proved to be a great help in the fight against child trafficking, and we are grateful for the initiative that Professors John Sammons took in generously offering their knowledge and resources to join the fight.

There are ways for everyone to use their talents to join the fight against trafficking. Sign up as an O.U.R. Volunteer today to learn about opportunities to get involved in your area.