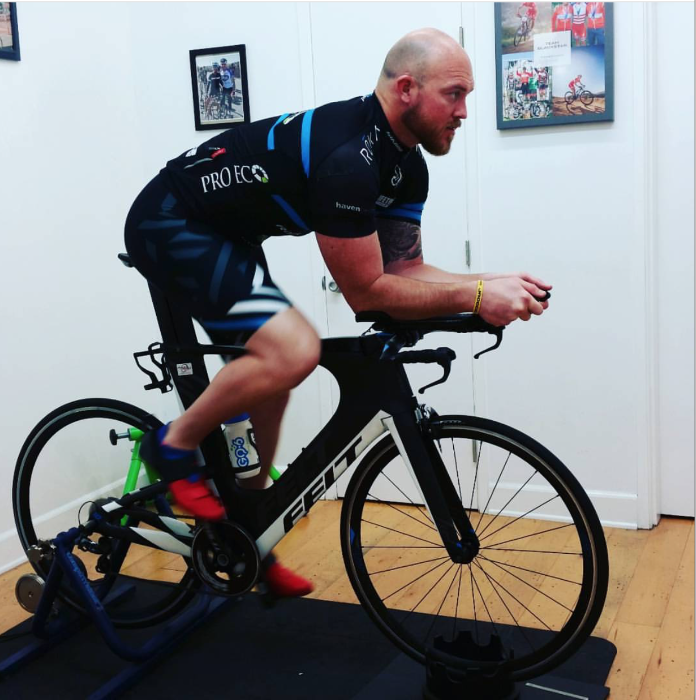 Ex-Navy SEAL Dutch Turley dedicates all his mental and physical energy to rescuing children from harrowing sex trafficker imprisonment. From rescue missions in Asia, sting operations in South America, to protection against child pornography in the U.S., everything he does, he does for the children. His determination to raise awareness to this cause led him to a unique and physically grueling ambition: a 140-mile Ironman race.

An Ironman consists of a 2.4-mile swim to start, then a 112-mile bike ride, and finally running a full 26.2 marathon finish. Turley is the director of rescue operations with Operation Underground Railroad. He hopes to raise $1,000 per mile for O.U.R.’s mission. “We’ve already got sponsors who’ve pledged to donate $1,000 for some of the miles along the way,” Turley said. “We hope to meet our goal to raise $140,000 to go towards the O.U.R.’s operations.” Supporters can visit YourRescue.org for more information on how to help Ironman.

Turley’s purpose in participating in the Ironman race is to help people see they can be an influence for change. “I want to tell people in the world that no matter how busy you are, you can always find time to get involved in a good cause,” he said.

PRO ECO is a race team dedicated to inspiring others through example. When its president, Scott Belnap, approached Turley about a way to raise money by participating in an Ironman race, he jumped at the opportunity. “If you really want to raise money for O.U.R. you could run an Ironman,” Belnap told Turley. “Dutch (Turley) just looked up and said, ‘I’m in.’”

“People who run an Ironman are passionate people,” Turley said. He feels promoting O.U.R.’s mission at an Ironman event will be very effective, as it appeals to committed people. “We hope to get people to be really aware of the issue,” he said.

Turley plans to participate in the Arizona Ironman race on November 20th, 2016 with the PRO ECO race team. PRO ECO started in 2012 as a “bunch of athletes with the same core values,” Belnap explained. “Other racers spend a lot of time away from families; we wanted to make our families a part of our team. So we are using this platform to do good.”

Belnap believes PRO ECO has a purpose that mirrors O.U.R.’s message: to reach out and become more than just yourself. He feels his team, like most Ironman competitors, are very driven people, and can therefore effectively get involved and promote awareness for O.U.R. “This was just a little race team we started because our kids thought it would be cool,” Belnap said. “Now with our connection to O.U.R. it has changed my life.”

After attending BYU Hawaii on a water polo scholarship, Turley enlisted in the Navy and became a SEAL in 2007. He underwent straining physical and mental training during his time as a Navy SEAL. Belnap agrees that Turley adds a “mental toughness” to the team. “When he joined I was like, yes! This is the kind of Navy SEAL we want,” Belnap said. Yet, despite Turley’s background, he feels to accurately prepare for an Ironman still requires at least a year of training. “You’re biking a lot, swimming a lot, and running a lot, but even more than that is the nutrition,” he said.

He feels training for an Ironman compares to his rescue mission trainings with O.U.R. in one specific way: mental preparation. “You go back to any type of training and those who make it through are the ones who have a deep motivation for what they’re doing,” he said. He is committed to train both mentally and physically to prepare for the race in November. As part of his preparation for the full Ironman in the fall, Turley is participating in the Oceanside half Ironman this month.

Turley has worked full-time with O.U.R. since July 2014. He explains the organization’s goal is a “very tangible thing,” which is why he got involved in the first place. O.U.R.’s founder Tim Ballard reached out to Turley when organizing his rescue team. “Tim wanted a team that could take action, that was trained to rescue and extract kids,” Turley said. “That’s what sparked my interest, because of the people we were bringing on, I knew it was going to be successful.”

Anyone can go donate to help O.U.R. in the fight against child slavery or help Turley reach his goal to raise $1,000 per mile by going to yourrescue.org. Follow the movement on social media using #ourironman.