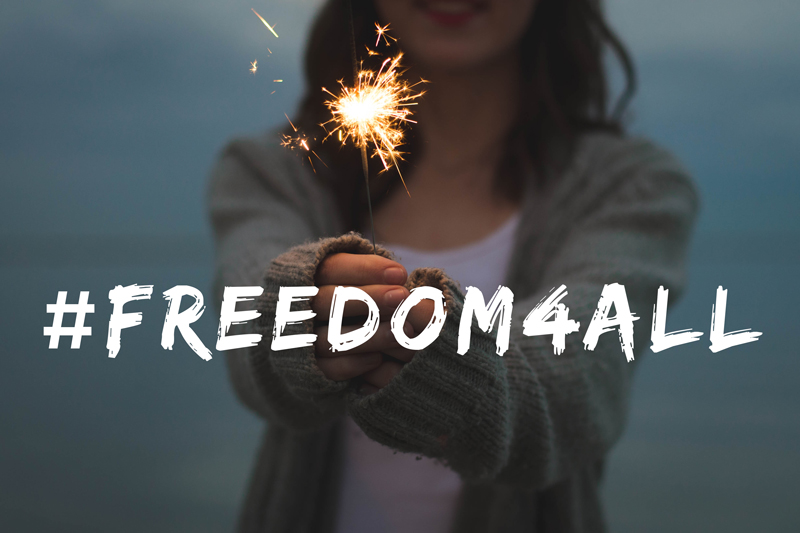 Operation Underground Railroad is running its “Freedom for All” campaign through the month of July to increase awareness of those who are enslaved around the world.

“July is a time that we reflect on independence and freedom; it is a time that we remember the high price our forefathers paid for our liberty. The #Freedom4All campaign was born to remind us that, although we enjoy unparalleled freedom, over two million children in the world are trapped in sexual slavery. O.U.R’s primary purpose is to rescue and rehabilitate these innocent children,” says O.U.R. Founder and CEO Tim Ballard.

“Slavery does exist today and its tentacles reach further and deeper than most of us realize, with its victims barely surviving in unthinkable darkness. The #Freedom4All campaign is a movement that will shine a light into this darkness and provide a way for each of us to eradicate this evil.”

To participate in the #Freedom4All campaign, use social media and be pro-active to help us get the word out by following these steps:

2. Wear the Message of Freedom: Purchase a Freedom4All T-shirt (all proceeds donated to fund rescue operations).

4. Flood the Message of Freedom: Turn your social media profiles “Blue for Freedom” by using a series of images provided by O.U.R.

5. Listen to the Message of Freedom: Visit Tim Ballard’s message on our YouTube Channel.

6. Donate for Freedom: Use this opportunity to donate to O.U.R. – every dollar donated means a child may be rescued. O.U.R. invited all to participate in the #Freedom4All campaign; to raise awareness of child sexual slavery’s evil and spread the message of hope by positive action and involvement.

ABOUT OPERATION UNDERGROUND RAILROAD: Operation Underground Railroad (O.U.R.) is a non-proﬁt organization that rescues kidnapped children from slavery. O.U.R. rescue teams (called “Jump Teams”) are comprised of highly skilled ex-Navy Seal’s, CIA and other operatives. These teams work in conjunction with and in full cooperation with local police forces and foreign governments to liberate children around the world.

The original Underground Railroad was a network that existed in nineteenth century America to liberate African slaves. Today, slavery has a new face: the face of an innocent child. Slavery’s victims today include nearly two million precious children throughout the world. They are slaves, exploited for sex.

The symbol of the Underground Railroad shines through the darkness that surrounds these poor children and offers hope and freedom to children that are abused daily. Thousands of these children are imported every year from third world countries to developed countries, such as the United States and Canada. Operation Underground Railroad can rescue and save them from the horrors of slavery. This is its mission!

O.U.R. rescues these children and delivers them to safe havens that offer freedom and rehabilitation. And in the process, O.U.R. expert rescue teams break the avaricious organizations that exploit these children and deliver the perpetrators to justice and jail. Using cutting-edge computer technology and human intelligence, O.U.R. rescue teams go into the darkest corners of the world to help local law enforcement liberate enslaved children and dismantle the criminal networks. www.ourrescue.org #freedom4all