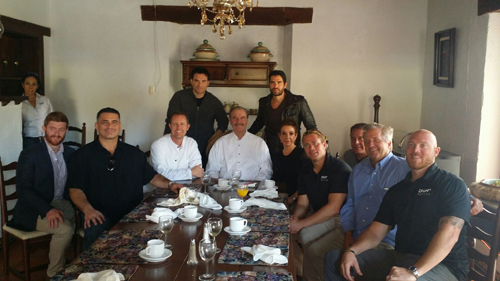 An unexpected opportunity landed O.U.R. Founder and CEO Tim Ballard as the guest of the former president of Mexico, Vincente Fox, last week.

Ballard used the opportunity to learn about CentroFox as well as widen the circle of influence for Operation Underground Railroad. The meeting was arranged by Eduardo Verastegui, a hunk of an actor that Ballard says women swarm around wherever he goes. He’s a model, singer and actor with numerous credits both in Mexico and the U.S., including a new film coming out shortly called Little Boy.

Verastegui sought out Ballard after hearing about O.U.R. and wanting to know what he could do to help. “He heard about us and wanted to do more, help us connect more in Latin America,” says Ballard. That desire led to Verastegui introducing Ballard to Vincente Fox.

Fox broke a 71 year record when he was elected President of Mexico in 2000, becoming the first president NOT representing the dominant Institutional Revolutionary Party (PRI) since 1910. He served as president for six years and continues to make substantial contributions to his country.

Today Fox heads up several organizations including Centro Fox which hosts not only a library, museum and theater, but a restaurant and hotel as well. Here he runs a number of philanthropic projects including education and youth leadership programs. His reach is far and wide and he has offered to extend that reach for O.U.R.

“He hosted us for two days and we weren’t just bystanders. I mean he gave us the seat of honor at every meal we had,” says Ballard. “He’s very interested, especially in the software that we’re building.”

The new software Ballard is referring to is called STARS and stands for Sex Traveler Apprehension and Retention System and is currently in development. O.U.R. has had a high level of interest in the software and has been meeting with executives from major high tech companies and government officials as well as U.S. senators and congressmen.

“It will be a game changer,” says Ballard. “It’s going to be huge.” The term “stars” is also symbolic in that stars were used in the original underground railroad. “The North Star especially was used to guide the slaves out. Stars know no boarders or boundaries and that’s a big part of our program.”

As Tim Ballard reaches for the stars, he is catching them one step at a time with the help of bright stars all around such as Vincente Fox and Eduardo Verastegui.