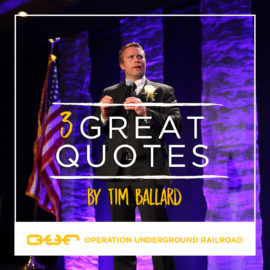 1. “They came to us, and just started screaming in joy and clapping,” he said. “It’s emancipation. It’s liberation.”

2. “I have those feelings, and I think, ‘If I mess up now, these guys might not end up for the rest of their lives in jail.’ And that’s the thing that keeps me going.”

Behind many of Tim’s quotes are personal experiences that drove him to fight against child sex trafficking. Each of these three stories are a glimpse into Tim’s experience as a modern-day abolitionist. We are grateful for all that Tim and his team does to save these children.

*Above stock image does not show survivors from this story, and is for representation only

“Government officials informed the children who were just rescued the men they saw as monsters were actually their liberators. They clamored to the window to catch a glimpse of the men who freed them from a life of slavery, and eventually their ecstasy overpowered them and they burst from the room to thank their guardian angels.

‘They came to us, and just started screaming in joy and clapping,’ he said. ‘It’s emancipation. It’s liberation.'”    -Tim Ballard

2. Tim Holds His Character to Put Traffickers in Jail

“Ballard said that on the most recent operation, which was his last time undercover, he almost started crying when the traffickers brought out the children. He goes undercover as someone soliciting the children’s services, and when the money exchanges hands, the authorities swoop in and arrest the criminals.

“This is before they’re liberated, and these kids were — they were crying,” Ballard said, his voice shaking. “And that’s something that — I think I told you — I don’t know if I’ve been in this too long. It was the first time that I felt like I was breaking character, I felt tears forming.”

Beck asked Ballard how he and his crew — many of whom are former Navy SEALs or law enforcement — don’t just get angry and “kill them all.”

“I have those feelings, and I think, ‘if I mess up now, these guys might not end up for the rest of their lives in jail.’ And that’s the thing that keeps me going,” Ballard said.”

This story is from a transcription of the Slave Stealer Podcast. It is about when Tim worked for the government and got called down to the Mexico border when one of the patrol officers found a man to be suspicious.

So, what happens is an agent or an officer, a Customs and Border Protection officer, this van comes rolling through, it’s the night of July 3rd, and he thinks something is not right. A little boy [and an older man] is at the port of entry, and the Customs and Border Protection agent, he told me, “Look, I don’t know why I put him in secondary, something…’ There was no reason, there was nothing obvious, he said, “The hair on the back of my neck stood up, and I sent the guy to secondary.” Once he had him in secondary, he starts opening up and looking through, and he sees videos. One of those videos is children being abused by this man. Yeah, they can’t believe this, and they call me. I’m in the Child Crimes group. My job is to go down and pick up the investigation and run with it. The customs guys, they investigate initial things on the border, they don’t go outside the border.

So, I get down there, I look at the video and I’m just like vomiting, like this is unbelievable. I go interrogate the guy. It’s him, you know… But more importantly the little boy… the first time I see this little kid, he runs to me. I’m the first guy there. I didn’t do anything amazing on this case, I was just the first guy there, I’m just the guy that showed up. He kind of instinctively knew that we were the good guys. And he comes running and just grabs me, and he is shaking and he is holding me. I’m thinking “this kid probably doesn’t speak English…” He’s shaking and he says to me, in a very clear voice, in English, no accent: “I don’t belong here”. I know exactly what he meant. He was so scared that he was going back into the evil grasps of this man, Earl Buchanan. And I’m just holding this kid, thinking “What am I going to do?” and I start crying like a baby. I’m just holding this kid, and I’m just crying.

So, the little boy… a couple of crazy things happened to me personally, I talk about my personal journey into this. This case almost broke me, like it almost ended my career. I thought it was over, because it was so hard. It was so hard holding this little boy, and meeting the other kids. I had this experience, I was driving back, I was testifying in a hearing for the case. At this point, the little boy was being taken care of in a foster care kind of home, that the Imperial county ran.

So, I’m driving back from San Diego through Imperial county, and there are two off-ramps in this town: one leads to the county shelter with this little boy is being taken care of, and the next one leads to my home. I thought to myself if I take, if I skip this – you know you play mind games with yourself, I was crying, I’m driving, I’m crying, I’m just like “I can’t deal with this.” If I take the first off-ramp, that means I’m going to stay in this job, I’m going to finish this case, and I’m going to stay in this. If I skip it, in my mind I’m going home and I’m leaving this job. As I’m driving, I’m listening to a singer, who is my favorite singer, who, I didn’t know him at all at the time, Peter Breinholt.

Right as I was approaching the first off-ramp that would lead me to a life of chasing down pedophiles and sex traffickers, and everything else, this song comes on, that, before this moment didn’t have much meaning to me, it wasn’t necessarily my favorite song that Peter Breinholt sang. It is called ‘Lullaby’. It tells the story of a parent figure who is talking to a child, who is having some kind of a nightmare of something bad happening to them. The parent comes into the room, he soothes the child, and then what the parent keeps saying is “They won’t come around here no more, they won’t come around here no more…”,meaning these monsters, the nightmares. I thought “you know what, because of what we did, and, again, I didn’t do anything spectacular on this case, but because of our efforts, the monsters won’t come anymore to this little boy.”

Whatever he took, or whatever pain he was forced to deal with, just outweighs by a million tons the pain that I have to go through to kind of be a witness to it, so I can go on and help. It wasn’t even a hard decision, I took that turn and I went to that little boy. When I got to him, he loved me, you know we were buddies, we had taken him to lunch and helped him out. He is doing well now. We have actually found family for him somewhere…

Thank you Tim Ballard, for showing us what it means to be a modern-day abolitionist!