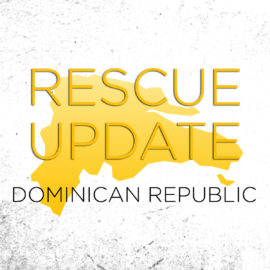 Operation Underground Railroad would like to salute the Dominican Republic government and International Justice Mission (IJM) on their great work in serving justice to the human traffickers and providing healing and redemption to the victims of our joint “Operation Mundo Nuevo” in August 2014. Thirteen survivors were rescued during that operation. Due to dozens of suspended hearings and other delays, their perpetrators were not immediately convicted.

On January 22, 2018, a Dominican Republic court found seven human traffickers guilty of selling children for sex, including the thirteen who were rescued back in 2014. After waiting to carry out justice for three and a half years, this is a huge victory!

Photo of Tim Ballard from the original Operation Mundo Nuevo in 2014.

IJM has remained with these survivors from the day of their rescue. They provided many services such as therapy, access to education, legal assistance, and economic empowerment, which has helped three survivors reach restoration. The remaining ten rescued children will continue to work with IJM to also reach that step of healing in the future.

Although this prosecution was a big challenge, we are grateful for IJM’s hard work to see it through. Raysi Marte, an IJM lawyer, said, “It was an exciting environment. We were there from 3 p.m. to 11:30 p.m. We thought the judge would call for a recess, but his commitment to the children was stronger. We continued on late into the night. The quantity of evidence we had was very strong.”

This victory was long awaited and has now secured justice for the survivors rescued three and a half years ago. We are grateful for this great success, and we hope to partner with these groups again in the future.

Human trafficking is an issue all over the world, and O.U.R. is working to end it everywhere.