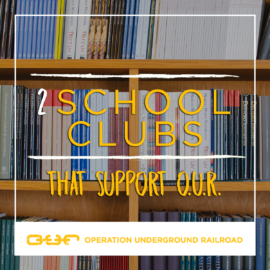 The Skyridge High School Abolitionists Club began this year when art teacher, Mr. Hooley, suggested the idea to his students during one of his class periods. During that same class period, they formed a presidency and got the club rolling! Hailee, a member of the presidency, had heard of O.U.R. before and joined the club after she learned that children actually have to go through things like trafficking. She also spoke of the club members’ passion for the cause,

“It was amazing to see kids who were already passionate about O.U.R., emerge and throw themselves into the work we did. I’m so grateful for the enthusiastic and engaged people we have in our club!”

Although there are other humanitarian clubs on their campus in Lehi, Utah, there has never been anything like the Abolitionists Club. The club started out small and the first few members recruited others to help their club grow. Hailee shared,

“I don’t think many students were aware that human trafficking was even a problem, so we would share statistics about modern-day slavery and it worked! We had some very dedicated members by the end of the year.”

The Skyridge Abolitionists Club has been very successful so far! With just a thirty-minute meeting every week, they spend their time discussing the issue and then planning fundraisers, service projects, and awareness initiatives. Some of the activities they have done include:

It is inspiring to see the work of these young people make such a difference in their community and high school. Here are some reasons that the club members support O.U.R.:

“It is an opportunity to help make a better life for kids who otherwise would have had horrific and scary lives. Just the thought of creating a better life for someone is huge, and it not only makes their life better, but through the experience, it makes your own better.”

“I am passionate about supporting O.U.R. because I want to make a difference! I can’t just sit back knowing that slavery is happening and not try to stop it! I cannot even imagine being taken into something so horrible. I want to help end human trafficking.”

Tesoro High School in Southern California started the O.U.R. Rescue Club in a similar way to Skyridge – there was no club like it that existed! Kennidy, the club president, became familiar with O.U.R. through members of her community who had worked with O.U.R. It is amazing to see how individuals in a community can have such an influence on others around them, especially these high school students. Kennidy went on to influence many other students as she recruited classmates for the club. She explained:

“When classmates first hear O.U.R. they are confused because they do not understand what the acronym means, but with a little explanation about the amazing organization…students are instantly on board!”

So far, these Tesoro High students have been very successful in their efforts to fight human trafficking. The club has two main goals –

1. To raise awareness of trafficking and the dangers of it

2. To hold fundraisers for O.U.R. Last year, they sold O.U.R. T-shirts, and this year they are planning a private viewing of the movie, “The Abolitionists.”

Not only has this club had an influence on Tesoro students, but they are now working with students from other states to launch a “pilot program” that consists of various lessons and activities for high school students. Their goal is to help O.U.R. spread to many schools across the nation to help educate students about sex trafficking! This will allow students to take what they learned into their future jobs and communities after high school.

We are incredibly grateful for all of the efforts of these two high school clubs. It is amazing to see the power in these students’ voices, and we are excited to see what they do next!

If you are interested in forming your own high school club to support O.U.R., please contact jani@ourrescue.org.

It is amazing to see what high school students can do to spread awareness about trafficking and support O.U.R. Read about a 17-year-old that raised over $100,000 for O.U.R. through a bike race here.